It all started with an idea. A new self-sustaining bridge in the Frisian village of Dronryp, which provides a connection in two senses. Besides connecting the two banks of the Van Harinxmakanaal, the project also provides the connection between ambitious parties who have ideas to get started with energy transition. It is an innovative project that not only looks at the sustainability of the bridge, but also at how the self-supporting bridge can be a starting point for other sustainability projects in Dronryp. In short: the bridge to a sustainable Dronryp.

Dronryp is a lively village with over 3000 inhabitants, situated along the A31 highway between Franeker and Leeuwarden in the Dutch province of Fryslân. It has a picturesque historic centre, several dozen national monuments, new development, SMEs, some large-scale energy consumers such as chicken butcher Van der Meer and Friesland Campina, and an extensive rural area. The initiators set up a project group that investigated whether it would be possible to make the entire village energy-neutral in 2025.

The size and mix in energy demand makes it a big challenge to get the village energy neutral. It is great to see that in addition to local parties such as Vereniging Dorpsbelang and the municipality of Waadhoeke, the provincial government, the Netherlands Enterprise Agency, grid manager Liander and a multinational such as Friesland Campina also joined the project.

The Green World Company has been involved from the outset of the project, where it was commissioned to carry out a project study and draw up a complete project plan. Due to our efforts, we succeeded in getting it widely supported and set up on a grand scale.

With this study we are looking at the possibilities regarding:

The project is being developed in cooperation with Vereniging Dorpsbelang Dronryp, the companies and residents of the village, with Dorpsbelang acting as the client. 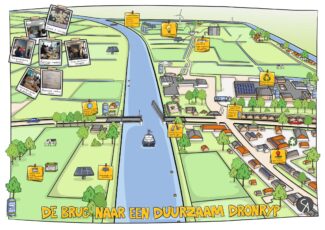